An amended application has been received for the above project.  It is available on the internet HERE

Below is a screenshot of the revised proposed front elevation: 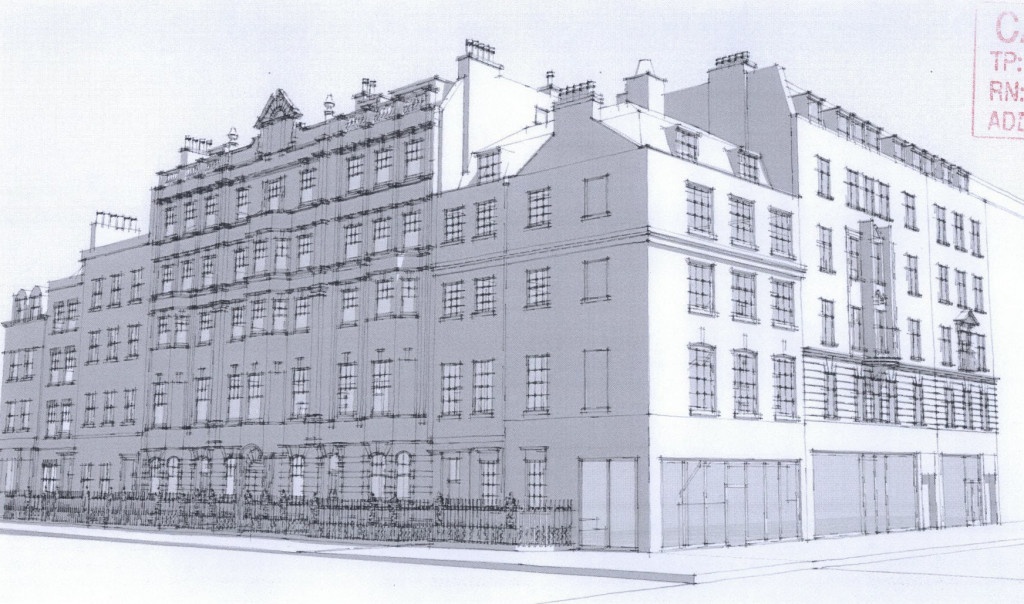 Below is a screenshot of the original application 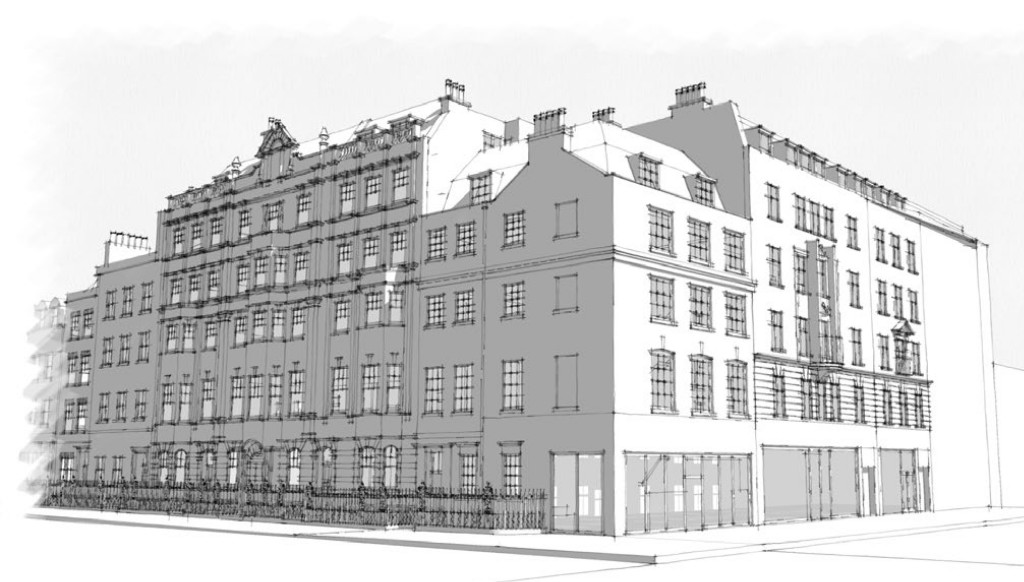 Below:  A screenshot of the artists impression of the original. 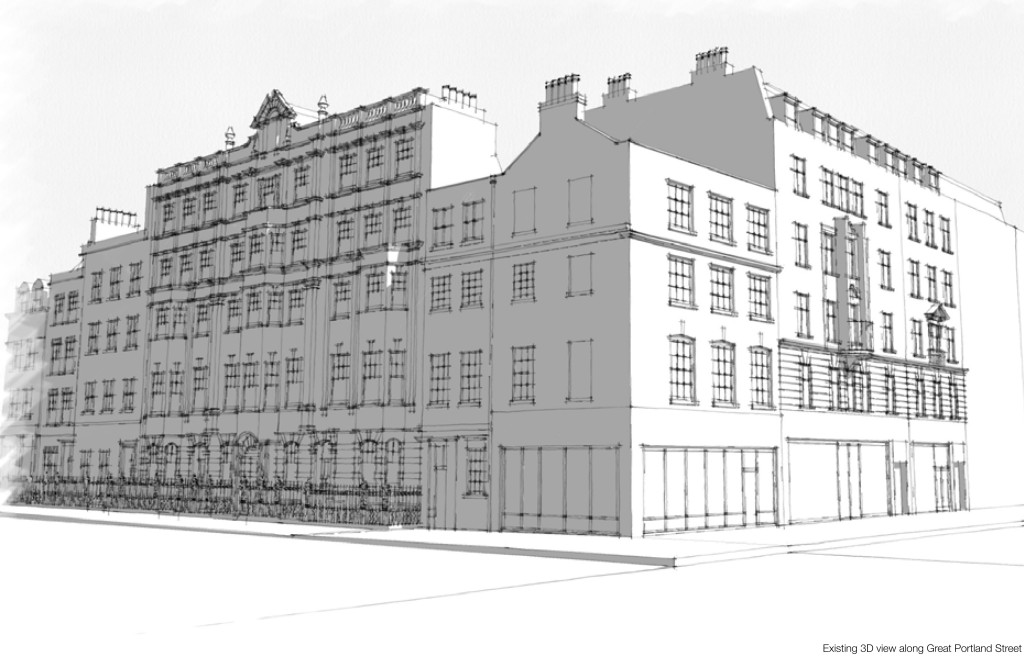 The deadline for responses was 8th January 2015

The Fitzrovia West Neighbourhood Forum is a fully established Neighbourhood Group with over 200 members.  We are awaiting final approval from the Council, to become the body tasked with making a Neighbourhood Plan for West Fitzrovia, the area within the boundaries of Westminster City Council. Our members attended the public exhibition and reviewed the planning application. We wish to register an objection for the reasons set out below:

First we wish to point out that the Statement of Community Involvement is very misleading in that it suggests that the proposals were generally supported by those visiting the public exhibition. A number of residents to our knowledge submitted detailed objections (verbally and in writing) in relation to the height and massing, the mix of uses including a petrol station, the design and impact on the adjoining buildings and conservation area and the very limited amount of affordable housing. We are particularly concerned that these objections were not fully reported and the developer and architect appear to have given very little consideration to any of these objections before the final submission, thus negating the purpose of the ‘public consultation’.

Our objections are set out in more detail below:

The bulk, height and massing:

This is a significant overdevelopment of the site in that it exceeds the City’s planning policy in the UDP in terms of habitable rooms per hectare. More important, the development includes two towers of 16 meters in height and one of 36 meters. The latter is twice the height of the nearby Holcroft Court residential building and will be clearly visible from Fitzroy Square. There will also be a significant loss of amenity to the residents of Holcroft Court through overlooking and loss of sunlight and daylight as the separation will only be approximately 8 meters.

In design terms, the proposed development is undistinguished in itself and takes little account of its relationship to the Georgian terraces of Cleveland Street or Holcroft Court.  In addition the height of the southern most tower will dwarf the east side of Cleveland Street and adversely affect the appearance and scale of the adjoining Fitzroy Square conservation area.

The mix of uses:

We are very concerned about the loss of small retail and business units on the ground and first floors of the existing building. These both provide a range of services to local residents and businesses and widen the range of employment opportunities in the area.

The proposal includes large increases in large floor area A3 and A4 uses which are already provided for elsewhere Fitzrovia. We welcome the use of some of the roofs as private amenity space.

We strongly object to the inclusion of the petrol station in this development. This is not needed and is not viable in this location and will further reduce the amenity of local residents through noise, smell, a potential source of fire, and increased traffic generation. This Forum has already lodged an objection to the inclusion of a petrol filling station in this location as suggested by the recent WCC consultative document, Travel and Transport. The petrol station in Clipstone Street was underused and changed hands several times before closing finally about a year ago. The current location and access arrangements are likely to make it even less viable while also adversely affecting local residents and businesses.  At the exhibition the developers claimed that they were ‘required’ to provide for a petrol station by the Council; this restriction should be removed.

We are particularly concerned about the lack of provision of affordable housing in line with the requirements of the UDP, Core Strategy and supporting documents. The proposal allows for only 10.6% of the housing by floorspace to be affordable whereas policy suggests this should be at least 30% as part of the site development. Recent developments in the area have not generated sufficient affordable housing as illustrated by the Fitzroy Place/Exemplar development (19% affordable) and the Rathbone Place Post office site (17%). Other schemes such as in Berners Street have been permitted to make commuted payments.

This site is an important one in Fitzrovia and is an excellent opportunity to provide a well designed set of buildings which respect the constraints of Cleveland Street and the conservation area and which do not adversely affect the residents of Holcroft Court. The proposal should also provide an appropriate mix of uses for the area and add a range of housing sizes and tenures to meet local and City needs.

As the freehold of the site is in Council ownership this is an ideal opportunity to create a development which sets an example by both making a positive contribution to the quality of the wider environment and by fully conforming with the Council’s own policies.

We therefore urge that this application is refused for the reasons outlined above.

If you have any views please make them here, by filling in the comment form below and we shall include your views or in our final letter to the planning authority.  Deadline 1st January 2015

Views emailed to us:

Fitzrovia is both east and west of Cleveland Street! We are just seeing Warren Street begin to blossom into a characterful road, we have Fitzroy Square just round the corner. The development between Holcroft and Cleveland Street should be taken as an opportunity to extend the attractive quality of our area, not swamping it by tall buildings. And certainly not putting a petrol station outside the windows of the members of our community living in Holcroft Court! Please revisit the plans, considering the whole experience of living in Fitzrovia

I completely agree with everything in the draft response.

I agree with the sentiments of your response and strongly agree that the council as freeholder should use this opportunity to show how well they and the designated neighbourhood forums (east and west) can work together. Development of the block could really add to the village but vibrant feel of Fitzrovia, attracting economic benefit in a way that doesn’t destroy the hand that feeds ie doesn’t destroy the unique qualities that attract residents and business to the area.

While I welcome the demolition of the existing building, this proposed replacement is – as you say – distinctly unremarkable. I would much prefer a development that takes into account the surrounding architecture of Fitzroy Square and the Georgian and Victorian buildings of Cleveland Street. This is a particularly beautiful part of central London and new developments in Fitzrovia should reflect the unique character of the area. The proposed building is completely unsympathetic to its surroundings and as a local resident, I would object to it being built in its current form.

This my reply to Dukelease regarding right to light.
I am in receipt of a letter from Dukelease dated 9.12.14, giving 21 days to reply, but I only receive it on 15.12.14.
Dukelease first claimed that they could rectify the problem of the right to light for residents of Holcroft Court by incorporating 2 terraces in the design, that would filter in light to all Holcroft Court flats facing the development, until that is, I pointed out that the reason for creating the 2 terraces or 3 separate blocks, is to give the luxury flats windows, their right to light.
So their second attempt was to claim to have carried out a “thorough” survey of flats facing Clipstone Mews, now claiming that only 4 flat’s living area would be affected by lack of light. But they did not visit all 60 flats, to see who has retained their living room as originally planned, nor did they ask CityWest Homes for the plans for Holcroft Court. Furthermore, all this is premised on living rooms being the only rooms that need daylight.
“In England and Wales a right to light is acquired under the Prescription Act 1832. Under the Act a right to light usually occurs once light has been enjoyed through defined apertures of a building for an uninterrupted period of 20 years. An infringement may give the neighbouring owner the right to seek an injunction to have the proposed development reduced in size. If the Loss of light is small and can be adequately compensated by money, a court may decide to award compensation instead of an injunction”.
Lastly, the height of the proposed new building will make Holcroft Court less energy efficient by blocking sunlight to the newly installed solar panels.
Holcroft Court Resident

You may also make your own representation directly via the Westminster City Council website here.

Having been approached by residents, we have sent a letter to WCC objecting to this application.

Update: the variation was approved at the WCC licensing committee hearing on 22 Jan, but with a capacity of 215 rather than 280, and a number of additional conditions intended to minimise nuisance to neighbours.

The application can be found here http://idoxpa.westminster.gov.uk/online-applications/licencingApplicationDetails.do?activeTab=documents&keyVal=NEZ7AQRP1RW00

Having received representations from some of our members we have met with the applicants and their agents.  A draft letter is enclosed that will be sent to the planning authority.  If you have any comments to make please include them below.  We will try and include them in our report.

Link to the application

141111 Letter to WCC with modifications

Please note that many applications are split into a series of smaller applications.  The link above will take you to the main documents.