The Forum received an application for funding to go towards their target of £398,400 to support the renovation of a space previously used by the Soho Poly Theatre in Riding House Street until it closed in 1990.

The intention is to create a fully equipped 50-seat working theatre for performances and for hosting other events including community uses.  The facility is within the basement of the larger University of Westminster building on Little Titchfield Street but will have a dedicated lift and access point on Riding House Street.  Match funding has been offered by the University and other companies and funding organisations.

The theatre group organised a public viewing of the space on 26th January and this was attended by a number of residents as well as a West End ward councillor and candidates at the May local election.  Members of the CIL Sub-Committee and all three ward councillors were sent copies of the Soho Poly Theatre Soho Poly Theatre CIL Application Form and asked for their views.  All replied offering positive support for the offer of funding.

The final application form was submitted to the Council on 9th February.  The application is likely to be considered at the WCC Cabinet CIL committee meeting on 4th April.

NB. This meeting was postponed owing to the election and we are waiting for confirmation of when this proposal will be considered.

Thank you to all the residents and businesses who responded to our consultation about planters in Fitzrovia.
The response was overwhelmingly supportive and included lots of great ideas for other places and greening initiatives. And also many offers to help look after the planters with watering and weeding.

100% of respondents were in favour of greening generally in the area and 94% were in favour of all the suggested sites. You can read the full report here:  Consultation Report Greening New Cavendish Street East.
We really hope that if we are able to successfully achieve this small amount of greening, then we can begin on other projects.
We have made some adjustments to the proposal, taking into account feedback and concerns (for example the corner planters at locations 2 and 5 will be a smaller rectangle shape not the larger square shape in the photographs – which means there will still be space there for people to wait at these spots when the pavement on New Cavendish Street is crowded.) 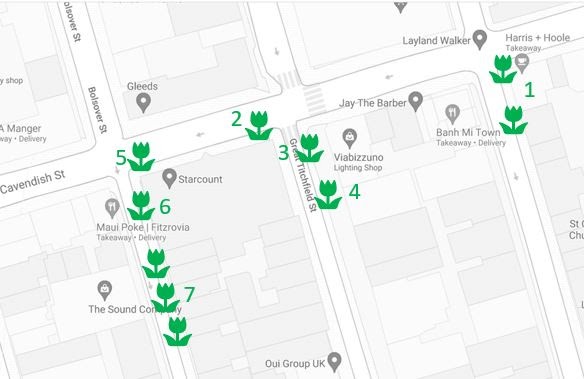 We had anticipated having enough money to complete this project using the Tesco funding, but costs have increased because the planters are on the public highway so we now need safety checks, traffic impact assessments etc. As a result we  applied for further funding from the Community Infrastructure Levy (CIL) and we have been successful and are able to complete this project. We  have  submitted a Maintenance Plan as requested by Westminster Council and we are currently waiting to hear  about the next steps to receiving the funding and making this project happen.

This project is currently on hold pending a decision about Oxford Street.

But you can read the Market Place Development CIL Application Form here.