The latest planning application for Holcroft Court implies that it is too nice a block for ordinary people to live in.

“At Present Holcroft Court enjoys levels of daylight far superior to situations commonly found in central London and the reduction due to the proposed development brings the levels in line with those found elsewhere in the central area.” Says Richard Leslie of DukeleaseIt seems that in spite of major opposition to a number of aspects of this application Dukelease have seen fit to ignore every single point raised and submit an unchanged application.

After the Second World War blocks like Holcroft Court were designed by committed architects as, ‘Homes for Heroes’.  The architects took great care to lay-out the block and the flats so that they had good levels of natural light, and access to a central garden.  This was a reaction to the dreadful conditions that people, particularly in this part of London had to live in.

Sadly, some of the Victorian tenements around here still do have poor levels of natural light.

These should not be used as a gauge by today’s developers.

Today, natural light is even more important, not just for the comfort of residents and their well-being, but because we should not be designing buildings that require artificially high levels of lighting or air conditioning.  This is wasteful of energy and unsustainable.

If we start to cram our neighbourhood with too many flats, and expensive private flats are allowed to unfairly overshadow more affordable buildings, I wonder what that say about us as a society?

High profits are to be made by any residential developer who chooses to build in this area.  Because of this they can well afford to build the highest level of sustainable dwellings themselves and there is no imperative, except greed, to overcrowd adjoining homes.

We welcome good development and redevelopment in Fitzrovia. But I don’t think we should welcome applications like this one.

Please leave a comment on this website, and tell us if you agree or not and why.

We have supported the discussions between Holcroft Court residents and the owners of this site.  In addition we have written to object to the idea of a petrol station being located in the mews.  We have questioned whether there is a need for a petrol station in this area. 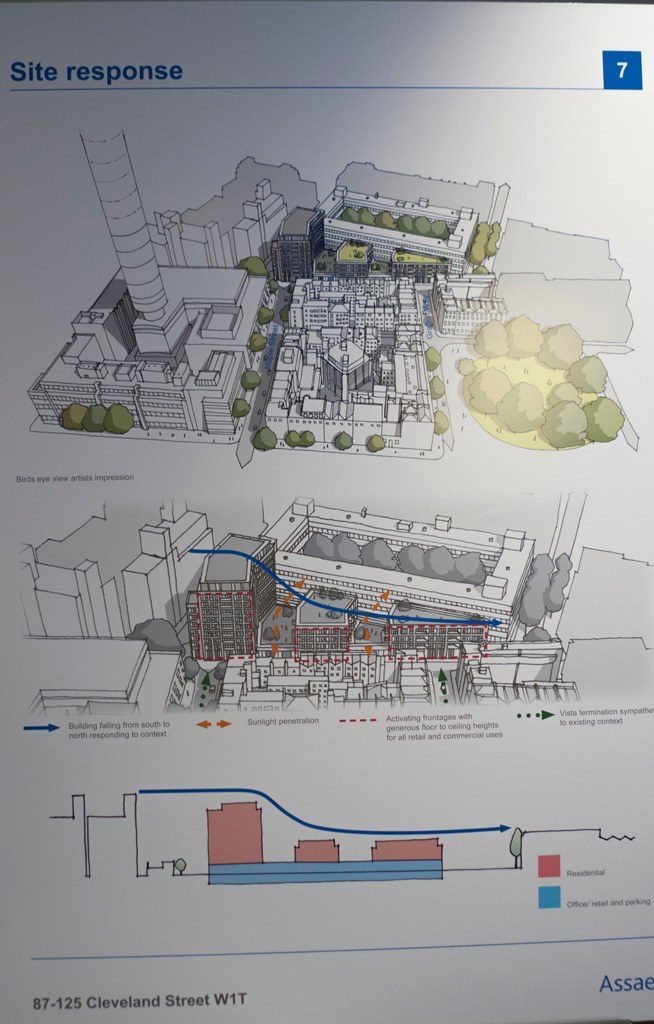 One of the panels from the public exhibition

It was good to meet you and David at the meeting on Monday 6th October. Unfortunately, I cannot say the same about meeting the Architect, who was the subject of much comment and some derision about some of the statements that he made at the meeting including:

Indeed, as a result of the Architect’s comments, we have looked at his proposals in some detail and have come to the conclusion that they are fundamentally flawed and actually misrepresent the true scale of the proposed ten storey building. I have commented on this in detail in the attached letter. However, I would advise that on one drawing, the relationship between the new ten storey tower and the University building on the south side of Clipstone Mews has been understated by as much as 12.5m. This is a fundamental error and one that is inexcusable, especially as it has been repeated to varying degrees on some other sketches. No wonder he didn’t want to confirm the actual height of the ten storey building. These basic errors give the impression that the Architect has tried to mislead people about the relative height of the ten storey building and the buildings surrounding the proposed development. We would not expect to find errors of this proportion on information provided by an Architect who has the words “We are diligent and professional” on their website.

We did think about asking for the Consultation to be classed as Invalid as a result of this, as we believe that there has to be a level of Trust between the developer’s team and the people being consulted. Due to the actions of the Architect, detailed above and on the attached documentation, we are now in a situation where we are unable to trust the information provided by the Architect and, by association, the developers themselves.

However, the information provided by your Architect for the Consultation has proven to be far more informative that he could have imagined. Not only does it show that the proposed ten storey building totally dominates the surrounding area, it also shows that the much smaller building that he has actually shown on some of his sketches also dominates the surrounding area to an unacceptable level. Indeed, the information that he has provided on the four storey towers show that even these have an unacceptable effect on the sixty flats in Holcroft Court that overlook Clipstone Mews.

I trust that makes our position on this proposal abundantly clear.