Cycle Quietways – Too little? Too Late?

Westminster Consultation on Cycling QuietWay from Edgeware Road to Fitzrovia

The Greater London Authority has developed a cycling strategy, which involved super highways and quiet routes which criss-cross the city.  In Westminster several of these proposed routes run through FitzWest.  The Fitzrovia Neighbourhood Forum welcomes the attempt to link up the city and to devise routes where less experienced cyclists might feel more comfortable.

The proposals are modest.  They include a cycle waiting area at the head of junction stop lines on major roads and a small cycle priority path leading up to the junction.  The proposals do not designate an area of the carriageway for cycles, do not provide cycle only phases to traffic lights and do not attempt to calm or restrict traffic in any way.  There is a modest section of cycle contra-flow adjacent to Holcroft Court.

We dont believe that cycle quiet routes can be achieved without closing roads to vehicular traffic or (at the very least) reducing access, type and speed of traffic on the proposed cycling quiet routes.

In principle we believe that cyclists and pedestrians should have priority over vehicles on all but the most major thoroughfares, throughout the West End.  Many people live and work here.  We agree with the GLA that the best method of transport for many of those people is walking and cycling.  But we also see that a plateau of cycle road users will be reached unless cars and other vehicles are not also restricted in their use of side streets. This could be achieved with quiet zones, speed limits, traffic calming and cycle/pedestrian priority areas. 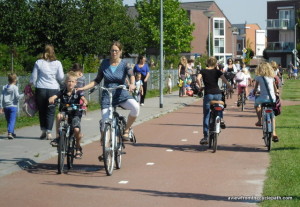 In Fitzrovia the narrowness of the streets, the quantity of on-street parking and the volume of deliveries, all mitigate against a successful cycling system.  We believe that quiet routes should be introduced, but we don’t feel that the measures taken, which are minimal, will make a lot of difference.  Vehicles, deliveries and parking must be better managed on these roads in order for them to be useful for novice cyclists.

In addition the measures taken to allow cycles to cross major road junctions seem flimsy.  Putting a priority waiting space in front of traffic is a useful measure, but it is not enough.  Cycle priority lights would be one solution, where cycles have their own green phase – perhaps linking with better pedestrian crossing facilities.

We enclose some images of quiet routes from Dutch and Danish cities to illustrate the difference between Westminster’s proposal and more enlightened cities.

We will be commenting formally to Westminster CC soon.  Please leave your views here and we will take account of them in our response. 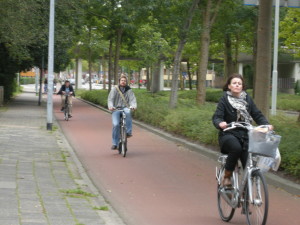