Today newspapers are reporting a concerning development in the long running saga of the pedestrianisation of Oxford Street.  Up till now FitzWest had been assured that there would be no pedestrianisation between Tottenham Court Road and Oxford Circus because there were no suitable routes for buses and taxis through our area.

However Valerie Shawcross, London’s deputy mayor for transport, has now announced to the London Assembly that the plan is to ban all vehicles from Tottenham Court Road to beyond Selfridges and the entrance to Bond Street tube station.  There is no indication of how this is to be achieved.

In response to this announcement I have written to Val Shawcross as follows:

I represent Fitzrovia West Neighbourhood Forum.  Our forum is a 200 strong group that represents both residents and businesses in Fitzrovia.  We are united in order to create a neighbourhood plan for the area.

One crucial aspect of our plan, triggered by strong public support, is to improve the streets where we live and work.  There is no public green space in our area, little sitting out space and hardly any pedestrian streets.  We suffer from some of the worst pollution of any residential area in Europe.

We are in the middle of writing policies that will go public this autumn.  So far public consultation has strongly prioritised the greening of streets, the reduction and calming of traffic and the improvement of arrangements for pedestrians.

In particular we wish to enhance the Great Titchfield Street/Mortimer Street hub of our area.  This has become a dynamic focus for local and specialist shops, small businesses and provides the area’s vitality.  But it is already stymied by the fact that Mortimer Street is a by-pass street for Oxford Street.

There are over 4000 people living in very dense flats in this area.  Our population is not dominated by West End Wealthy, but by ordinary people, many of whom have lived in the area for years, whose children attend the local schools and who work in local businesses.  Many people live in social housing, or housing for the elderly.  They cannot choose to move out of the area if it becomes even more devastated by traffic.

This week’s announcement that pedestrianisation in Oxford Street shall go ahead leads us to fear the implications for our area, especially Mortimer Street and Newman Street.  While the Crossrail project has gone ahead we have had several long term bus diversions through our area, along Mortimer and Newman Street.  This has resulted in lines of jammed buses belching out exhaust.  I enclose a photograph of Newman Street, taken during one of those diversions, to indicate how unpleasant those short term diversions were. 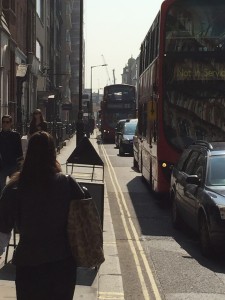 If the pedestrianisation of Oxford Street results in a permanent diversion of taxis and bus routes along these streets it would be devastating for the area.

We support a reduction of traffic in Oxford Street, and have no objection to pedestrianisation per se.  In fact, we too wish to look at traffic calming schemes to support improvements to Great Titchfield Street and Mortimer Street, which is the social and economic hub of our area.

Unfortunately it is not just Oxford Street that subjects the population of Fitzrovia to life threatening pollution.  The diagram below (taken from the Kings College Model commissioned, as I understand it, by GLA) identifies Mortimer Street and New Cavendish Street as highly polluted as well.  This pollution is exacerbated in the centre of London because of the urban heat island effect, which can trap a bubble of polluted air, stopping it dissipating, as it might do in greener parts of the capital.  I am sure that enlightened traffic engineers in the GLA have already considered these limitations and are proposing alternatives.  For example a bus hub at Tottenham Court Road and a further hub at Hyde Park Corner would be well supported by our community. 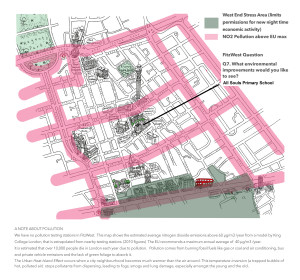 We are especially concerned that All Souls’ Primary School,  our excellent local primary school,  lies only yards from the Mortimer Street/Newman Street junction.  The prospect of diverting transport onto a minor road and increasing pollution levels so close to an area where children are taught, is not worthy of the new GLA administration.

The FitzWest Neighbourhood Forum is doing all it can to improve the environment for our inner city residents, existing businesses and the hundreds of thousands of new visitors that will be attracted by Crossrail 1, Crossrail 2 and HS2 which also arrives at our doorstep.  We seek help from the GLA to achieve that result, not hindrance.

Please, can I have your assurance that no scheme will be approved which diverts public transport and taxis through the streets within our area?

I have also sent copies to our Ward Councillors.

Please add your comments below.