Westminster City Council has launched a wide-ranging public consultation to identify the best way forward to manage the future growth of Westminster entitled, ‘Building height: Getting the right kind of growth for Westminster is seeking the views of all those that live, work and visit the City.’

The feedback received during the course of the consultation, which will run for eight weeks, will help inform Westminster City Council’s future plans for the City which will be set out during the statutory consultation on the City Plan later this year. As part of this consultation there will be a series of public events taking place across the City.

There is a questionnaire on the internet which we encourage members and friends to complete.

Here is FitzWest response to the consultation:

Dear Sirs,
Thank you for giving us the opportunity to respond to your consultation regarding building heights.  We welcome the fact that you publish a wide ranging consultation before bringing out a draft policy.

Economic growth is often equated to growth in construction or density.  Yet in the centre of a capital city there is no evidence to suggest that this is so.  In fact cities like Bangkok, that have undergone uncontrolled growth in recent years, have seen a dramatic fall in economic activity as environmental quality has plummeted.  What happens is that instead of the city thriving, it starts to die. People decide to re-locate to greener and more pleasant suburbs.(i)

Westminster, being located almost entirely in the Central Activities Zone, should not be seen as a place for construction growth, but instead as a place for economic growth.  Economic growth will not occur if Westminster becomes overcrowded with unnecessarily tall and over-bulky buildings. 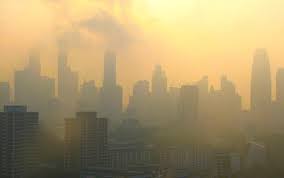 Function of the Central Activities Zone (CAZ) and its Core

The Core CAZ, in general and Fitzrovia in particular, are areas of extraordinary diversity.  Planning policy tends to have seen the Core CAZ as simply a retail hub.  It is not now and given the rise in internet shopping, it is unlikely to become so in the foreseeable future.

It is this diversity that contributes to the economic dynamism of The City of Westminster and to London as a whole.  The diversity includes institutions, educational establishments, smaller offices, hi-tech businesses, residential, specialist retail and cafes.  Most of these uses would leave if the area were redeveloped to a larger scale.

The Centre for Cities states in a recent report;

Small firms trading with other firms in London, nationally and internationally (small B2B firms), are concentrated in two areas: London’s core and to the west, near Heathrow and national motorway links. These firms account for just 18 per cent of all London’s small firms but have the greatest potential to make a significant contribution to future jobs growth. (iii)

A growth policy should be aimed at retaining and supporting this cohort of small businesses.  They do not require tall buildings, or large floor-plates.  In fact, such businesses rarely locate to new buildings, which they cannot afford.  They are far more likely to seek space within the buildings that Fitzrovia already possesses.   They locate to be near one-another – so redevelopment has a negative effect in forcing out small business and bringing into the area larger, less economically dynamic business.

In most cities large floor-plate and high rise offices are located on the outskirts and useful transport hubs.  Compare Montparnasse in Paris and Paddington in Westminster.

Tottenham Court Road (within Westminster and within Fitzrovia) is not a tabula rasa.  Its is not a blank canvas onto which high-rise can or should be foisted.  It is in fact one of the most historic parts of the City of Westminster, being very ancient indeed and thus should be a candidate for conservation, not annihilation.

There may be some individual sites, on the boundaries of Fitzrovia where higher rise housing is relevant and can be built to redress the gathering imbalance of housing types  and tenures in our city centre.  We have identified sites in our emerging Neighbourhood Plan. But because there is densely packed housing here already the capacity of sites to come forward that would not overshadow and over-bear existing dwelling is extremely limited.

The population of Westminster is said by Westminster City Council to have been underestimated at the last census by 10%.  It is not satisfactory to say (as has been argued in recent planning applications) that people who live in the centre of a city should put up with increasing density, even if their habitable windows are obliterated from daylight.

The majority of Fitzrovia West (and in fact the whole of the central core) is located within a series of conservation areas.  It already has a very high residential population, made higher by the inclusion of a very rich mix of activities.  The general building height of 60ft in residential buildings and 80ft in ‘factories’, which comes from the London Building Acts of the 1880s and 90s, is still valid in this area and should not be compromised. 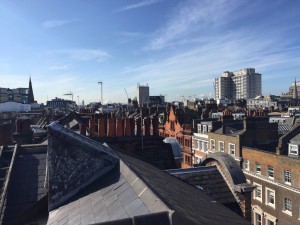 View across the rooftops of Great Titchfield Street looking towards Soho and Mayfair. The consistency of roof-line is remarkable.

Most historic urban centres have a cap to heights.  Oxford is one example.  Paris is another.  Westminster should have its own height cap.  This should not be seen as a restriction to growth, but in fact one of the reasons why the historic centre will always be more attractive than the outskirts. Dynamic, highly profitable, discerning businesses wish to locate here.

The perceived wisdom is that areas of high public transport provision should be the location of high-rise.  That is how Centre Point received planning permission originally.  But in Central London that logic is wrong.  It is a fallacy, because it assumes that there is capacity on the ground already.  But in Central London we would question whether the imminent improvements in public transport are not simply running to catch up.  That the new Cross Rail stations, balanced by reduction in private car trips and bus services may only just cover the current needs, let alone natural growth.  What evidence do we have that such systems will have capacity to support major growth in residential or working populations in the centre?

The Servicing of Taller Buildings

The consultation paper does not consider the servicing of taller buildings.  The centre of Westminster can not cope with the servicing it already has.  Rubbish collection, deliveries and street cleaning have all failed in this area.  The level of vermin and mess is embarrassing.

Servicing of tall buildings requires far more hinterland and larger carriageways than is possible in Fitzrovia.  It requires large service bays and a regular stream of heavy vehicles.  We do not think it is appropriate in central London and in Fitzrovia in particular where the densities are already extremely high.

Since the Kings Cross disaster, when the fire brigade is called in Fitzrovia, regardless of the scale of the fire,  four fire engines turn up, from two different locations.  That is because of the impossibility of ensuring a traffic free access for emergency vehicles. Yet the potential for emergency access to larger buildings is never considered in planning policy.  It is taken for granted that the city can cope. We don’t think that Fitzrovia (or other parts of the core CAZ) can cope.  Any further increase in the critical mass of servicing in this part of the centre of London is not sustainable.  This has impacts on the pleasantness of our streets but in these times of terrorism could contribute to a major disaster if left unresolved.

High rise buildings are expensive to heat, cool and service.  They use powered systems that are alien to the essentially Georgian structure of our current city, that does not need gas guzzling, air conditioning or complex heating systems.  Any increase in carbon emissions or heat supply from building exhausts will turn an already polluted area into a danger zone.  Unless a large building can show a reduction in such impacts it should not be considered.

There is a suggestion that a few extra floors on any building might be tolerable.  But we would maintain that the flat rooves of many of the buildings in this area should be used as amenity space.  That means planted and accessible roofs.  Modest increases may be acceptable if such an increase provides much needed public or semi-public amenity space.

i) ‘The increasing density of population (due to population growth and migration) and disorderly urban settlements and together with the rapid economic development have brought an exceeding demand of infrastructure, public utilities and public services, which is unfortunately beyond the capacity of the Bangkok Metropolitan Administration (BMA), the city administration of Bangkok, to handle alone. This results in the deterioration of urban environment, urban services and also urban quality of life.’  Report by Suganya Boonprasirt, Policy and Planning Department, Bangkok Metropolitan Administration, City Hall of Bangkok Metropolis. http://www.gef.or.jp/20club/E/bangkok.htm