Just a quick reminder of this important request! If you have not had the chance to do so already, could you please give us your support.

Please allow the Forum to continue to work towards developing the Neighbourhood Plan and support the re-designation before the 13 January 2020 deadline – the current designation expires on 05 February 2020.

We would ask you all to support the re-designation and to  encourage all local residents and businesses to do so which they can do by sending an email to neighbourhoodplanning@westminster.gov.uk or in writing to:

Here is an extract of the email from the Neighbourhood Planning Team at Westminster Council:

The Fitzrovia West Neighbourhood Forum designation expires on 5 February 2020. The forum has applied to the council to formally renew its designation in accordance with the Town and Country Planning Act 1990 the Localism Act 2011 and the Neighbourhood Planning (General) Regulations 2012.

Copies of the application documents can be viewed on the Council’s website at https://www.westminster.gov.uk/neighbourhood-forums. Hard copies will also be made available for inspection during normal opening hours at the Council’s offices at City Hall 64 Victoria Street, SW1E 6QP.

Representations on this application should be received by no later than 5pm on Monday 13 January 2020. They can be made by email to neighbourhoodplanning@westminster.gov.uk or in writing to: 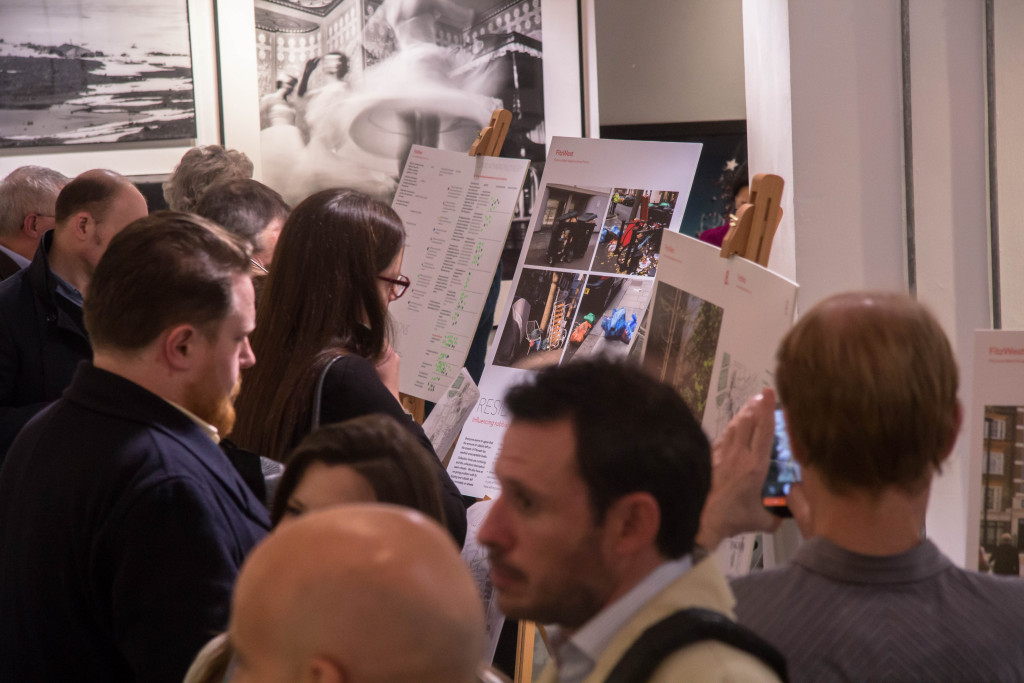 We’ve had a few complaints that the web version of our consultation is not as easy to follow as the exhibition itself.  So we re-arranged the pages for you and hopefully, made it easier to follow and to comment.  Click here to go to the exhibition pages

We had an amazing response at the exhibition, but we still need your comments if you didn’t have a chance to go. You can download the questionnaire and send it to us, or you can browse through the panels leaving, your thoughts on each page on the website.

Thank you for taking the time to comment.  We hope to be able to show you very soon that we have listened and are responding to your ideas.

You can also email us at info@fitzwest.org 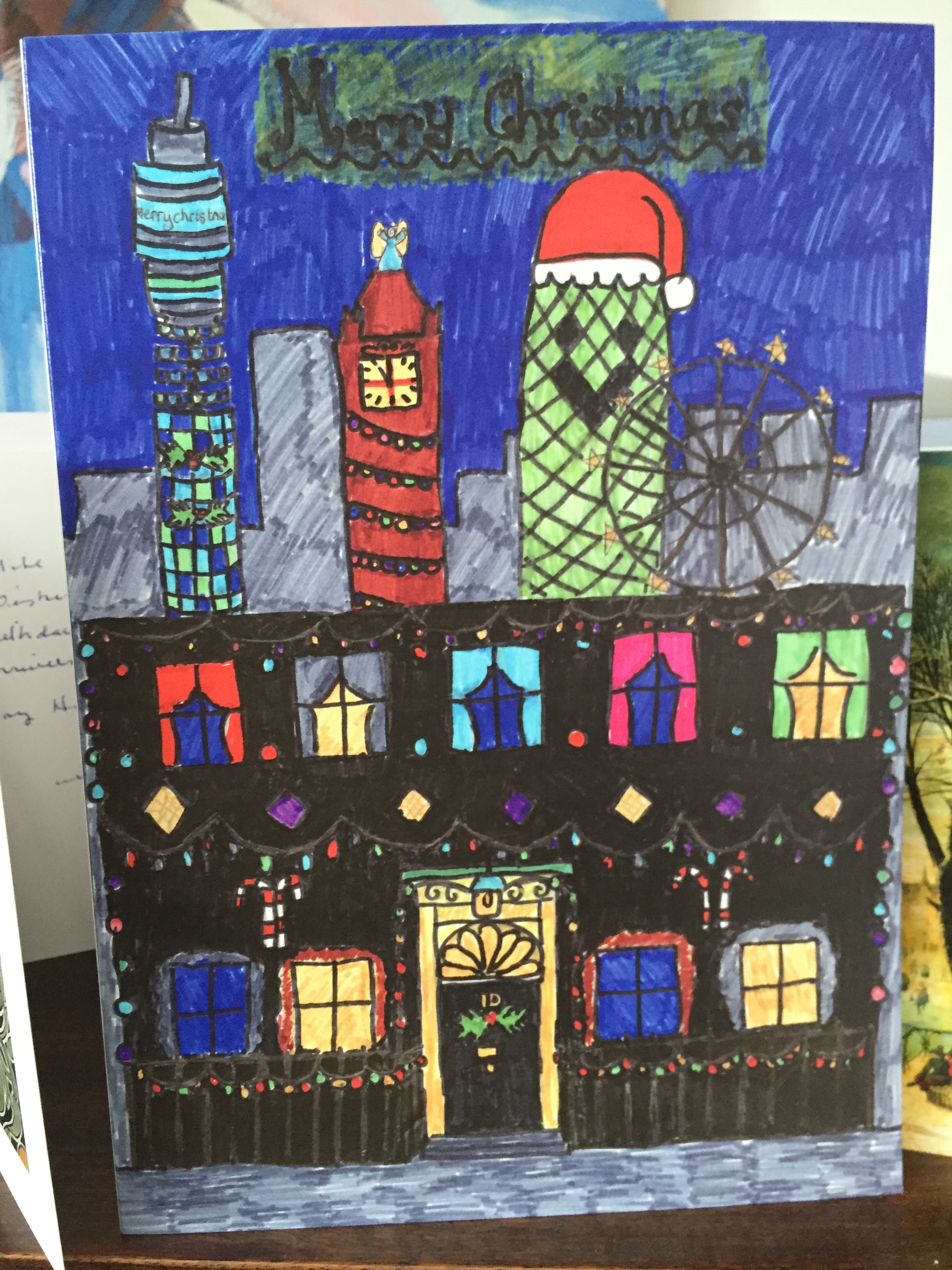 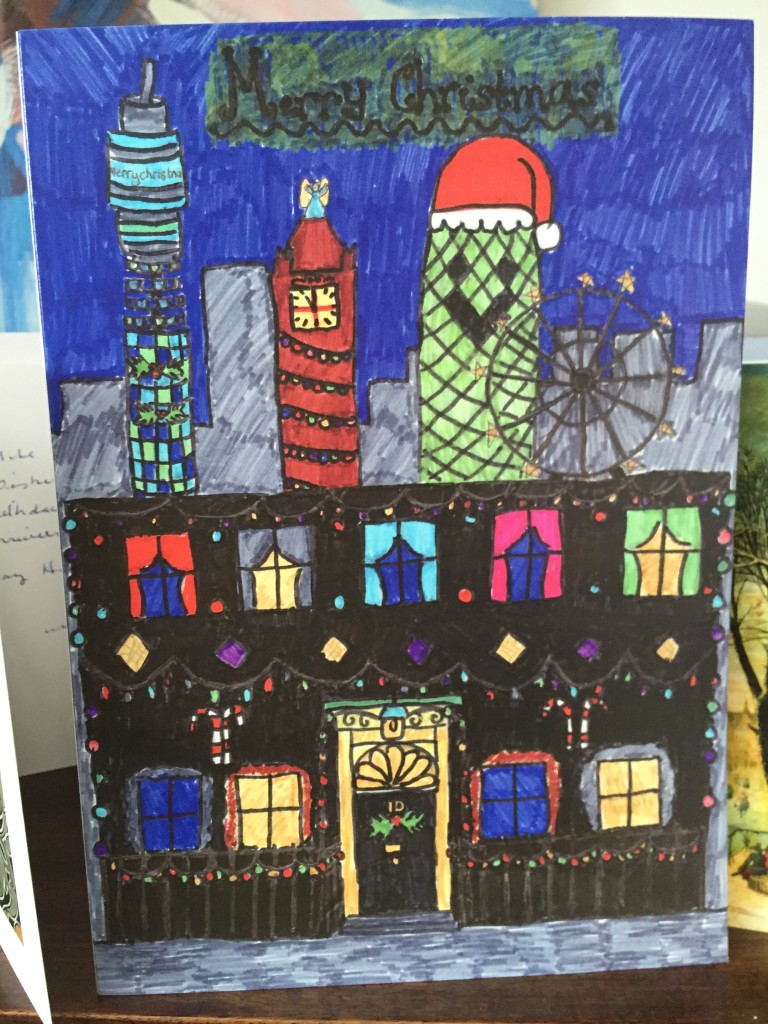 Congratulations to Georgina Davies, aged  nine years, from All Souls C of E Primary School in FitzWest for her stunning Christmas card design.  And thanks to Councillor Paul Church for sponsoring such an excellent competition and turning the winning design into a stunning greeting card.

I can’t help but observe that here is more proof that Fitzrovia is definitely the most creative part of the West End. Georgina’s work illustrates this perfectly.  She has portrayed a London Christmas, as it is; a decorated city with tower blocks, welcoming lit windows and garlanded front doors. What a good idea to put a Father Christmas hat onto top of the Swiss Re tower! 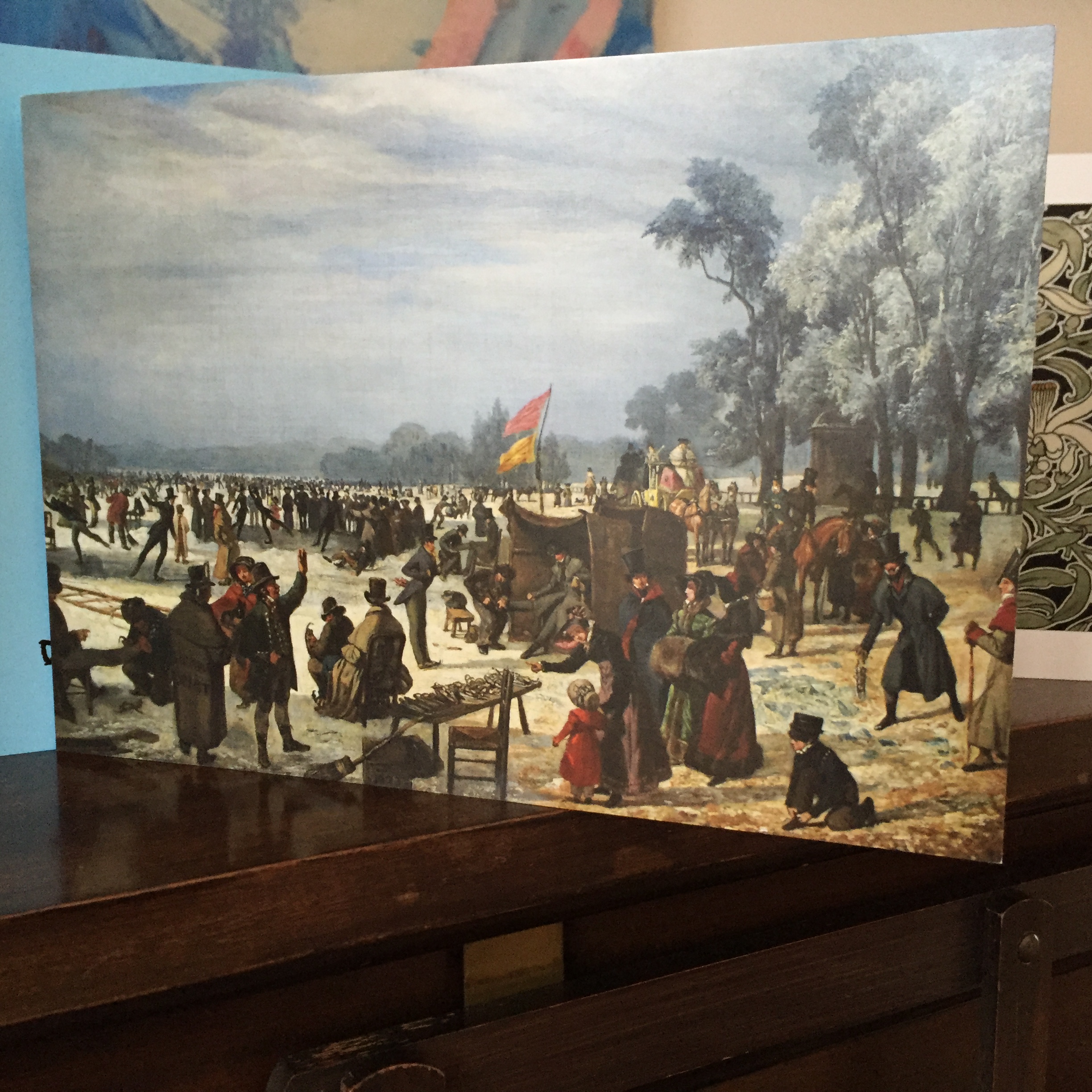 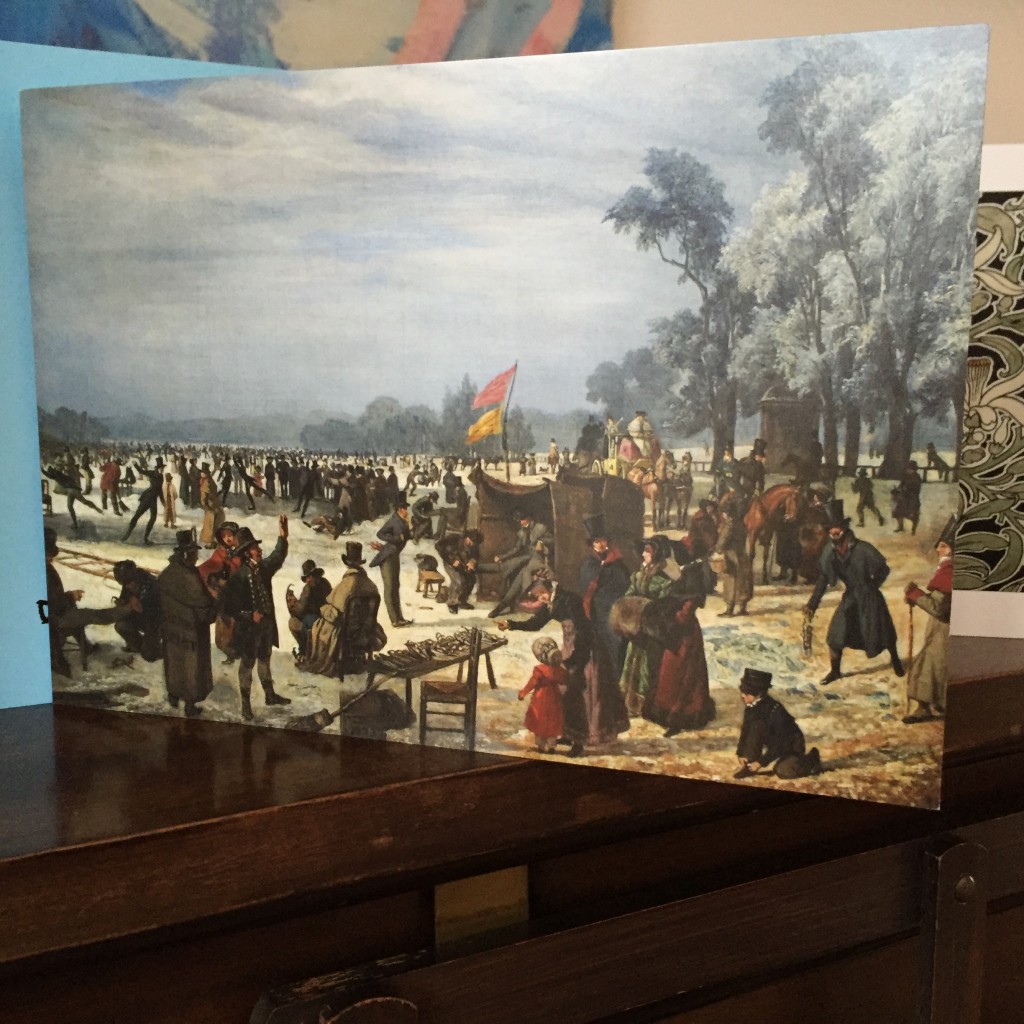 We have received a Christmas Card from Westminster City Council, signed by the leader Councillor Philippa Roe.  As we have nowhere to display it, it will have to remain on my mantelpiece, but I thought that it would be worth circulating the very pretty picture of ice skating in Hyde Park.

Complements of the season to all our readers! 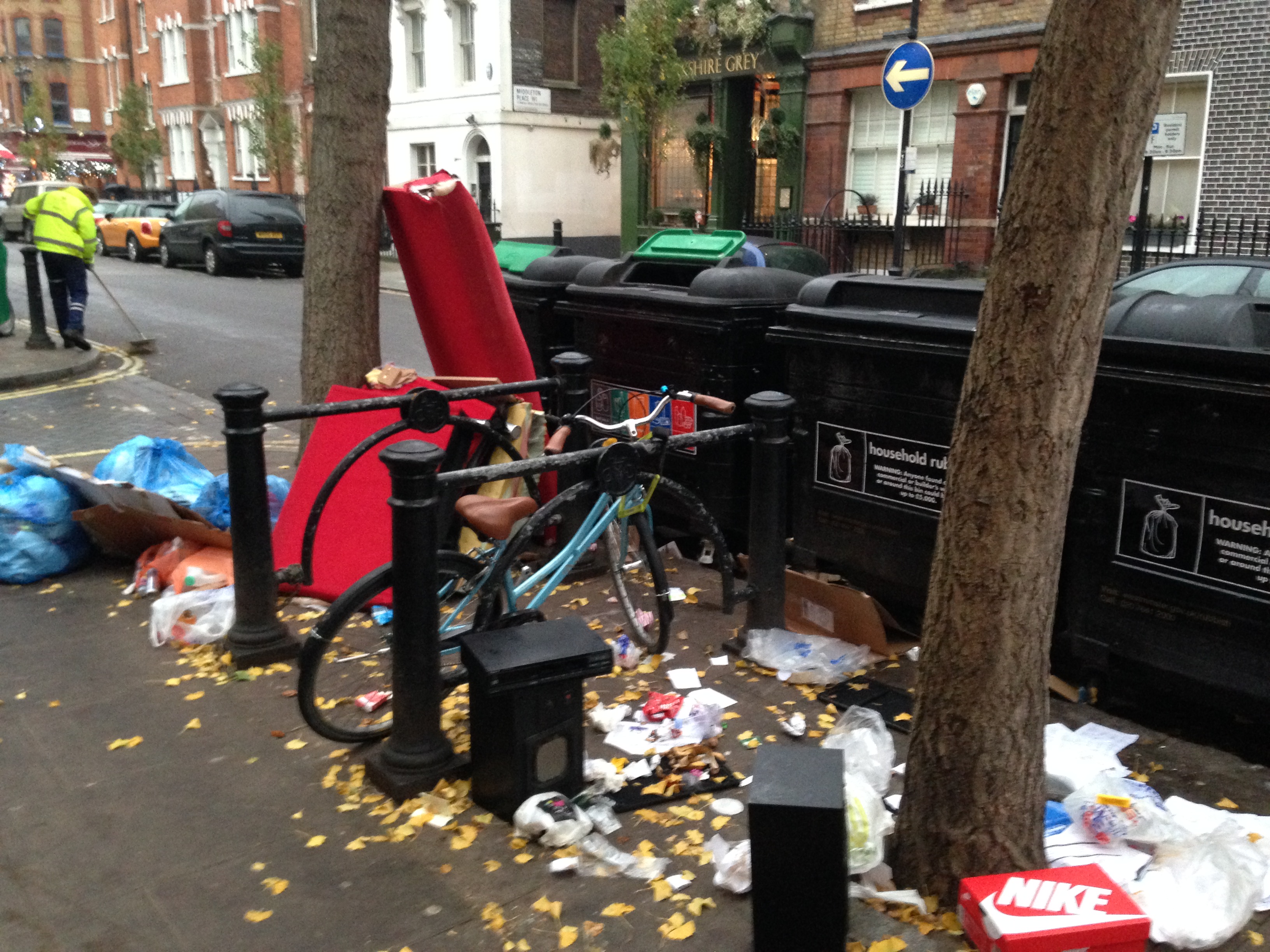 This Neighbourhood Executive has been concerned for some time that all the processes regarding the charging of Community Infrastructure Levy (CIL) have gone ahead without any consultation with the neighbourhood forums.  This is curious because the Localism Bill expressly states that properly constituted neighbourhood forums should be fully consulted and their priorities be used to account for spending of 15% now and 25% of the CIL once the Neighbourhood Plan is agreed by referendum.

We are pleased to have received the enclosed letter from Councillor Robert Davis today, clarifying their understanding of the issue. We welcome the fact Westminster City Council  are aware of the duty to consult fully with the Neighbourhood Forums on the expenditure of the neighbourhood proportion of CIL.  We look forward to fruitful discussions.  Perhaps now some of the local issues like rubbish collection and the state of the streets can be properly addressed.

Here is our response:

Dear Councillor Davis,
CIL
Thank you for your letter received today, we have placed a copy of the letter on our website with this reply.
We were aware of the procedures advised by government and thus slightly curious as to why the Neighbourhood Forums were not consulted at the time the council reviewed infrastructure expenditure.
However, we accept that you will now be undertaking a wider consultation process to come to agreement with the new neighbourhood forums as to how that proportion of CIL should be expended.
We assume that you will be contacting us again soon so that a process and programme of discussion can be devised that will lead to a final agreement with the various neighbourhood forums.
I have put forward the suggestion that the West End Neighbourhood Forums have many priorities in common, and that it would be prudent to work together as a group.  We await officers response to that proposal.
In addition I note that government advice supports the involvement of Ward Councillors.  Our Ward Councillors have not yet attended any of our executive meetings, but some of them have been present at our public consultations.  We urge any of them that are not yet formal members of the forum to join, so that they automatically receive information about issues of importance to the community.
We are holding another exhibition on Monday 11th January 2016, at the Getty Gallery Eastcastle Street from 11.00am to 8.00pm, where our draft policies and priorities will be made public.   We do hope that your officers and politicians will want to attend.  In particular we are holding a briefing in the evening and hope that as many as possible can come.
We are looking forward to a positive and productive dialogue, and look forward to hearing more from your CIL team in the not too distant future.
With best wishes
Wendy Shillam
27 November 2015

Thank you for your email of 27th November. My apologies for not responding to you sooner, but all of our efforts in this area have been focussed on the recent Westminster Community Infrastructure Levy (CIL) public examination and the work arising from.

I am very grateful for your views on the importance of a positive and productive dialogue about the best and most effective way of involving neighbourhoods in agreeing how the neighbourhood CIL funding proportion will be spent. My team will be in touch again when we have developed proposals for discussion and your suggestion of a joint approach for West End neighbourhoods is an interesting one to which we will certainly give thought.

Thank you also for the information about your exhibition on 11th January. I have drawn it to the attention of my officers and Andrew Barry-Purssell, our Place and Investment Policy Manager and the City Council’s lead officer for CIL, will be in attendance.

Cabinet Member for the Built Environment 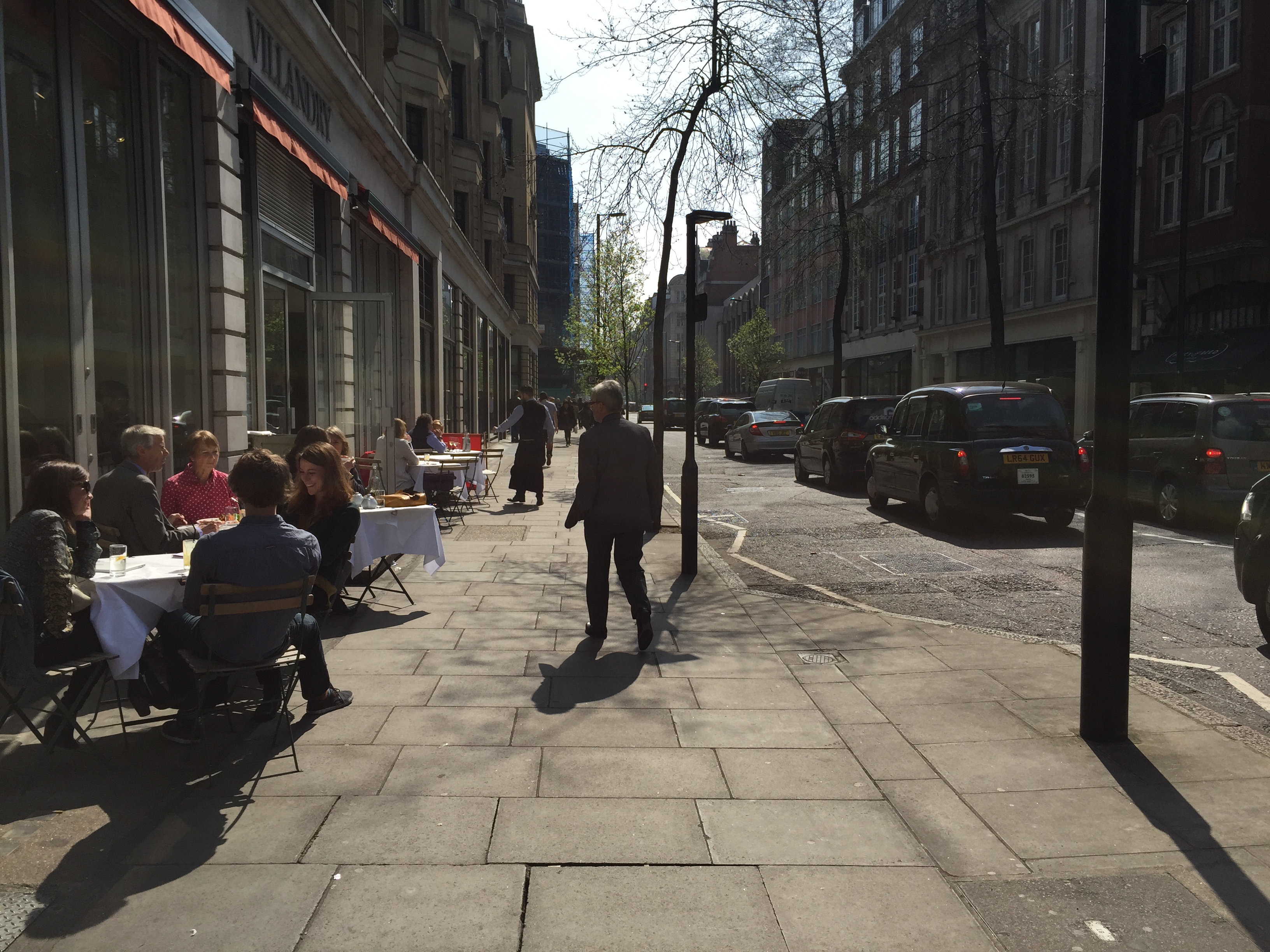 Office Space in the West End is dwindling 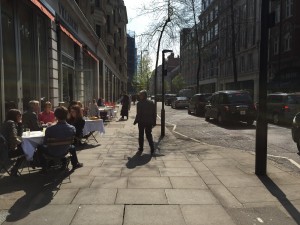 The figures for Fitzrovia and Bloomsbury indicate a massive take-up of office space.  The rental values are shooting up as well.

The report states that

‘As well as Facebook committing to almost 230,000 sq ft at One Rathbone Place in Fitzrovia, several game and software developers signed up to West End space during Q3. Proportionately, this was most pronounced in Soho, as the TMT sector accounted for 82% of all space taken.’

Having a quick discussion on Twitter this afternoon with Steve Chambers @respros over in Soho, we both conclude that the rise in residential schemes has started to edge office space out of the picture.  GE report that demand for small spaces is dwindling – but might that be because the rentals are too high right now for any entry level business to consider.